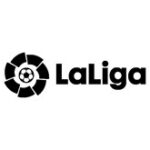 LaLiga is a sports association made up of the clubs and public limited sports companies that compete in the professional ranks of the Spanish football league (Primera and Segunda Division). Since 2010, the International Federation of Football History and Statistics has considered the top tier of the Spanish game to be the best league in the world, in view of the record-breaking honours held by the competition’s affiliated clubs and players. In its efforts to guarantee the sustainability of the professional game, LaLiga is firmly committed to the fight against piracy and promotes fair play in a competition which is free of match-fixing and completely rejects violence.