The Football Association [The FA] has today published its annual report on the Football Leadership Diversity Code for the 2021-22 season.

During the second season of the Code, some progress was made, with football collectively exceeding targets in hiring Black, Asian and Mixed Heritage senior coaches in the men’s game and coaches in women’s football. There was an uplift in the number of recruitment shortlists which had Black, Asian and Mixed Heritage female candidates, while the number of diverse male candidates increased again.

However, while some clubs are showing that positive change is possible, it is clear that more needs to be done across the game to meet the Code’s targets. Disappointingly, the 2021-22 season saw a decrease in the number of senior management hires for both female and Black, Asian and Mixed Heritage candidates. The recruitment of non-senior diverse coaches in the men’s game, as well as female coaches in women’s football, also fell below the targets during the season.

Some signatories had more success than others, which may be because they have more diverse communities from which to recruit, but it is also likely that variations are due to some clubs having more mature equality, diversity and inclusion [EDI] and recruitment frameworks. With the Premier League’s EDI Standard updated in 2021, and the EFL’s Together strategy launched this autumn, all clubs should soon have the tools to ensure they are recruiting the best talent from diverse shortlists.

The three governing bodies of English football which are signed up to the Code collectively exceeded seven of the eight targets this season. The full report, which includes updates from all signatories, can be found here. Key highlights from the reporting period of 1 August 2021 to 31 July 2022 include: 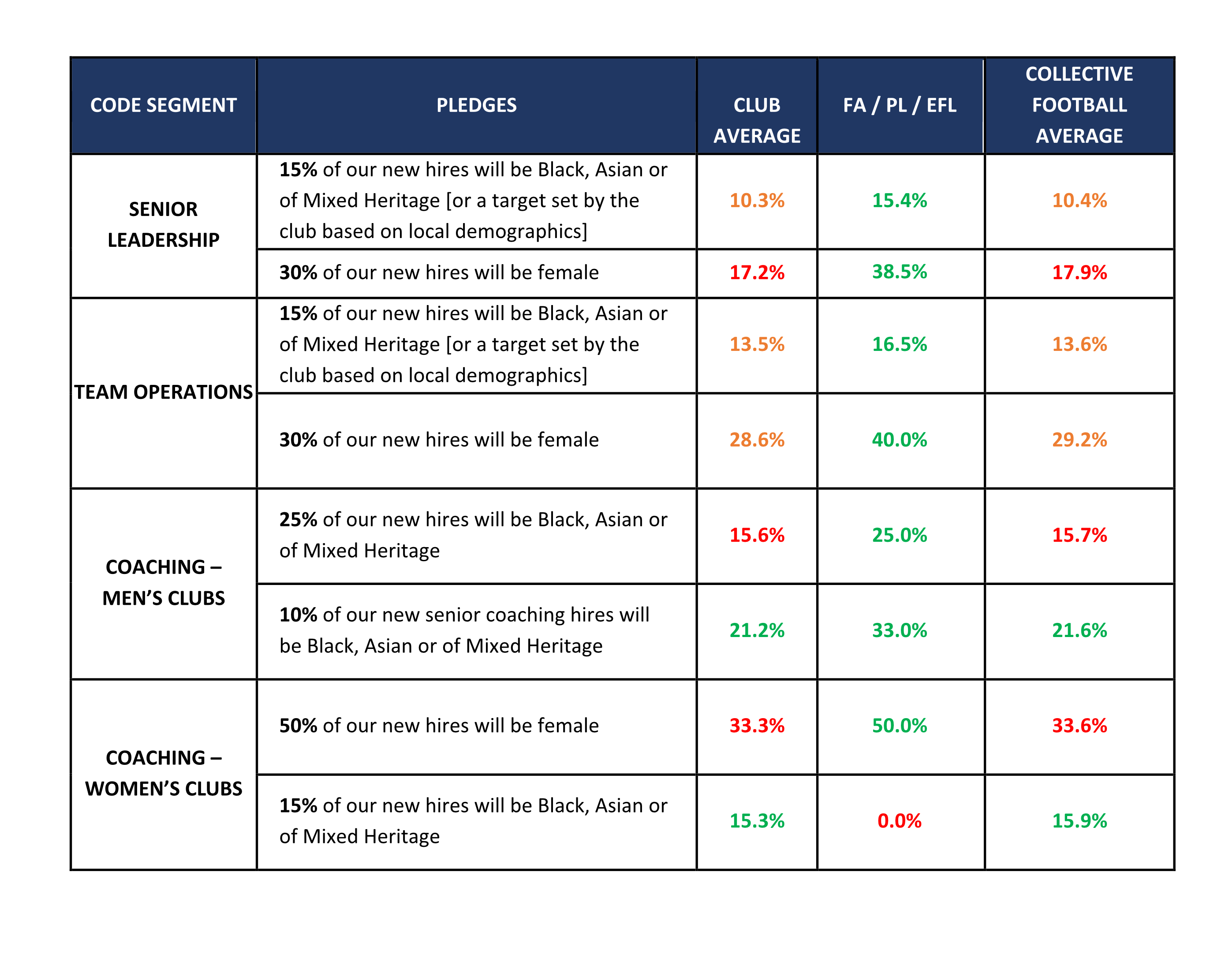 FA Chief Executive, Mark Bullingham, said: “I would like to thank everybody involved for supporting the Football Leadership Diversity Code, as part of a collective desire to create meaningful change. This year shows some signs of progress, with a shift in recruitment processes that will start to change the game and the three governing bodies exceeding seven out of eight targets. However, while we saw clubs exceeding diversity targets for senior coaches in the men’s game and coaches in the women’s game, there is still a huge amount of work to be done across the game. We understand that substantive change will take time, but a number of clubs have already made progress, and we expect to see more clubs follow that lead in years to come.”

Premier League Chief Executive, Richard Masters, said: “The Premier League fully supports the Football Leadership Diversity Code as we collectively work to achieve greater diversity across all areas of the game. Over the past two years, the Code has represented an important commitment from across football to tackle inequality and create long-term change. We are pleased to be making progress but there is still much more to be done to ensure there are opportunities at all levels of the workforce – this remains a priority for us.”

EFL Chief Executive, Trevor Birch, said: “Since signing up to the Football Leadership Diversity Code, the EFL has made a number of strategic developments to its Equality, Diversity and Inclusion [EDI] operation, to help make the EFL and its Clubs more reflective and representative of the communities in which we serve. During that period, the EFL has seen a rise in both female and Black, Asian or Mixed Heritage employees recruited. Whilst this is a step in the right direction, the League is committed to further diversifying its staff base, ensuring everyone has the same opportunity to succeed across the EFL. We will also continue to work collaboratively with Clubs and partners to improve our game, together.”

Kick It Out Chair, Sanjay Bhandari, said: “The results on recruitment of Black, Asian and Mixed Heritage coaches in both the men’s and women’s game, and the achievement of targets by the football authorities, are encouraging. There is also plenty of room for improvement in other areas such as senior leadership and the recruitment of female coaches. Two years into the process, now is a good time for pause and reflection across the industry, to share learnings and best practice. Collectively, that will enable us to increase the pace of change.”

In 2021, The FA launched a careers platform to create greater transparency of roles available across English football and to help clubs and organisations reach a more diverse audience of candidates. All signatories of the Code can advertise vacancies on the platform and since its launch, over 2,600 vacancies have been posted, with over 13,500 applications. Of these, 40% of applicants were from a Black, Asian or Mixed Heritage background, while 19% of applications were from females and 100% of candidates said they would recommend the platform to their network. The FA continues to encourage those who want a role within the game to register their profile on the platform to receive alerts and to search for roles relevant to them.

More information on the Football Leadership Diversity Code, including the version which is tailored for the National League System, grassroots game, and women’s pyramid, can be found here.