EURO 2020: ONES TO WATCH WITH JOHN VIOLA ACADEMY

|
Clubs & Rightsholders,Commercial & Sponsorship,Performance, Academies & Youth Development
The final matchday of EURO 2020 kicked off yesterday and with the transfer window now open once more, we're taking a look into which of the players participating would be the ones to watch during the tournament.

In the second of a series of articles about Euro 2020’s Most Wanted, football agents John Viola and Phil McTaggart of our partners John Viola Academy provide their insight into a number of players to keep an eye on that are likely to be involved in big transfer stories this summer. In addition to the insight provided below, the John Viola Academy is offering a free webinar at 2PM BST on June 25th, sharing their expertise on how you can become a football agent, which you can sign up for here. 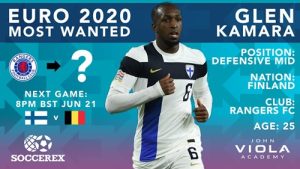 “Finland are enjoying their first ever national tournament at Euro 2020 and much of their qualification success has come down to the influence of Rangers midfielder Glen Kamara.

“Kamara impressed against Denmark – the three points from which have Finland neatly poised going into matchday 3 – and once again showed a composure and technical ability which stood out against Russia even in defeat.

“A classy midfielder who has immense awareness, Glen can take the ball in tight areas and has superb in-game intelligence, but Kamara also runs all day and was a stand-out in the Rangers side who went the season unbeaten in Scotland.

“I know plenty of Rangers fans who’ve been watching Kamara’s success through the cracks in their fingers and there’s plenty of suggestion he could be offski this summer.

“A return to Arsenal has been mooted whilst there are intensifying reports regarding newly promoted Watford.

“In the past everyone from Lille, to Benfica, to Borussia Dortmund have been linked – with CSKA Moscow even claiming they moved last season – but this summer there’s a feeling building that he could leave Ibrox and we expect the fee to be in the region of £10m.

“This is not to be sniffed at considering Rangers famously signed the midfielder for only £50k from Dundee in January 2019.” 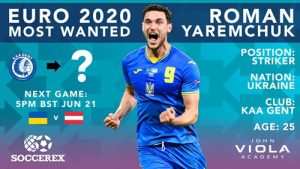 “Roman Yuremchuk has so far formed one part of a deadly duo for Euro 2020 dark horses Ukraine who’ve impressed in the opening two games of the tournament.

“The Eastern Europeans might’ve fell to defeat against the Netherlands on the opening day but even in that match Yaremchuk and teammate Andriy Yarmolenko lit up the tournament.

“Both hauled Ukraine back into the match and despite the 3-2 defeat this resurgence had plenty thinking there is more to this talented side.

“Next up was a clash with North Macedonia – who you should underestimate at your peril – and once again it was the deadly duo who stole the show for Ukraine.

“Yarmolenko opened the scoring before Roman Yuremchuk showed his lethal finishing ability inside the box to make it 2-0 before North Macedonia pulled a penalty back later on.

“Yuremchuk currently plies his trade with KAA Gent in Belgium but his performances at Euro 2020 are already turning heads.

“Goalscorers are football’s greatest commodity and West Ham United have been strongly linked in the last few days.

“But should they launch a move for the ex-Dynamo Kyiv star, then they can expect competition from the likes of AC Milan.

“The price? It’s reported to be an impressive £18m, a transformational amount of the likes of Gent in the Belgian Jupiler Pro League.” 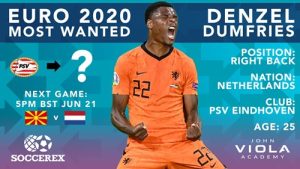 “Coming into the tournament plenty had reservations about the Netherlands and how they’d cope without the influence of the likes of Virgil van Dijk in this latest generation’s first major tournament.

“Two wins from two is a solid start – even if their 2-0 victory over Austria was blighted by a succession of missed chances – and their stand-out player has actually been a defender.

“Well, these days wing-backs or full-backs need to be able to do it all and the influential Denzel Dumfries is showing that he has all the attributes of a top-level modern full-back.

“Explosive, powerful and committed, we’ve seen Denzel athletically command that side for the Dutch whilst also showing his class by popping up with two goals so far, scoring in each of the nation’s Euro 2020 matches.

“Nothing gets you more noticed than goals and at 25 Dumfries is certainly at an age where he should be looking to move out of the Netherlands and on to a higher domestic level.

“The Premier League in England looks like a likely destination – his powerful style certainly suits the all-action division – and there have been links to Newcastle United, Tottenham Hotspur and perhaps most prominently, Everton.

“With a reported €15m release clause in his contract – a particularly modest fee for a player of Dumfries’ ability – Bayern Munich are also said to be sniffing around.

“Whatever happens, we expect that this will be the season the right-back moves on to a higher level – and I’ve no doubt he can impress when he does so.” 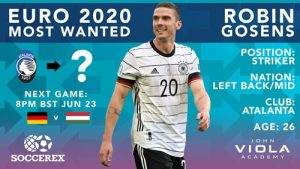 “If Germany’s first game against France had some doubting their ability in the final third of the pitch, the nation’s second day goalfest with Portugal will have gone some way to banishing the critics.

“The Germans have somewhat of a changed side compared to what we’re used to with the interesting addition of Robin Gosens on that left-hand side catching the attention of clubs.

“Gosens has been growing in stature season on season ever since joining Serie A side Atalanta and his performances have formed a big part of their recent success in both Italy and the Champions League.

“Coming through in Dutch football with Vitesse and Heracles Alemo, Gosens has been at Atalanta since 2017 but is only now beginning to be recognised by some of Europe’s top clubs.

“The talented wide man thought he had Germany ahead in the eventual 4-2 win over Portugal but it was ruled out for offside, even if it was a taste of things to come.

“The wing-back set up Germany’s equaliser to make it 1-1 and once again delivered the ball from the left to eventually make it 3-1.

“But his final hurrah was a headed goal in the six-yard box to make it 4-1 before the game ended 4-2. Gosens – quite rightly – was given Man of the Match.

“Now bigger and better things may well be on the horizon as Europe’s elite sit up and take notice.

“Barcelona are reportedly readying a bid whilst Juventus have also been named alongside Gosens, whose success has largely been attributed to influence of Atalanta coach Gian Piero Gasperini.

“Atalanta are reportedly holding out for €35m for the player – not bad considering he only cost them €1.2m four seasons ago.” 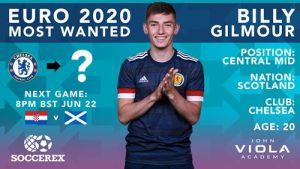 “It’s no exaggeration for us to say that we believe this boy is the real deal and back in Scotland everyone is pretty excited about what’s to come for Billy.

“Tartan Army manager Steve Clarke brought this controlling influence into the middle of the park for the match against England and Billy was named Man of the Match.

“A product of Rangers’ youth academy, Gilmour was touted to be a success from a very young age and after moving to Chelsea at 16 has broken into the Stamford Bridge side.

“Given his debut by legendary England midfielder Frank Lampard, Gilmour’s development has been steady but there is growing talk regarding a potential loan move next season.

“A composed midfielder who plays way beyond his young years, Gilmour is a deep-lying, controlling playmaker with a keen eye for a pass and a confidence and strut on the ball.

“Under Thomas Tuchel, Billy hasn’t seen as much game time as he would perhaps like or even need and next season is a big one for the midfielder.

“There have been several clubs linked with a loan move for Gilmour and his performance against England will have done little to discourage potential suitors.

“West Ham have been heavily linked whilst newly promoted Brentford are another side who’ve been mentioned alongside the player.

“A return to former club Rangers – who harbour Champions League hopes next season – has been mooted as another possibility.

“There’s every chance Chelsea might follow Man City’s pathway for Phil Foden – who has always remained at the Etihad – but if a loan move is the preferrable option we expect plenty of suitors.

“It’s just a shame that following a positive Covid-19 test we won’t be seeing young Billy on matchday 3.

“Let’s hope the Scots can make the last 16 so we can see some more of this wonderful young talent.”

The insight and expertise provided by John and Phil from the John Viola Academy comes from countless years of football agent experience – expertise they are willing to share with you. Every modern footballer needs an agent – why can’t that be you? The John Viola Academy is running a free webinar on Friday June 25th at 2PM BST, which you can sign up for here – this is an opportunity you cannot miss!